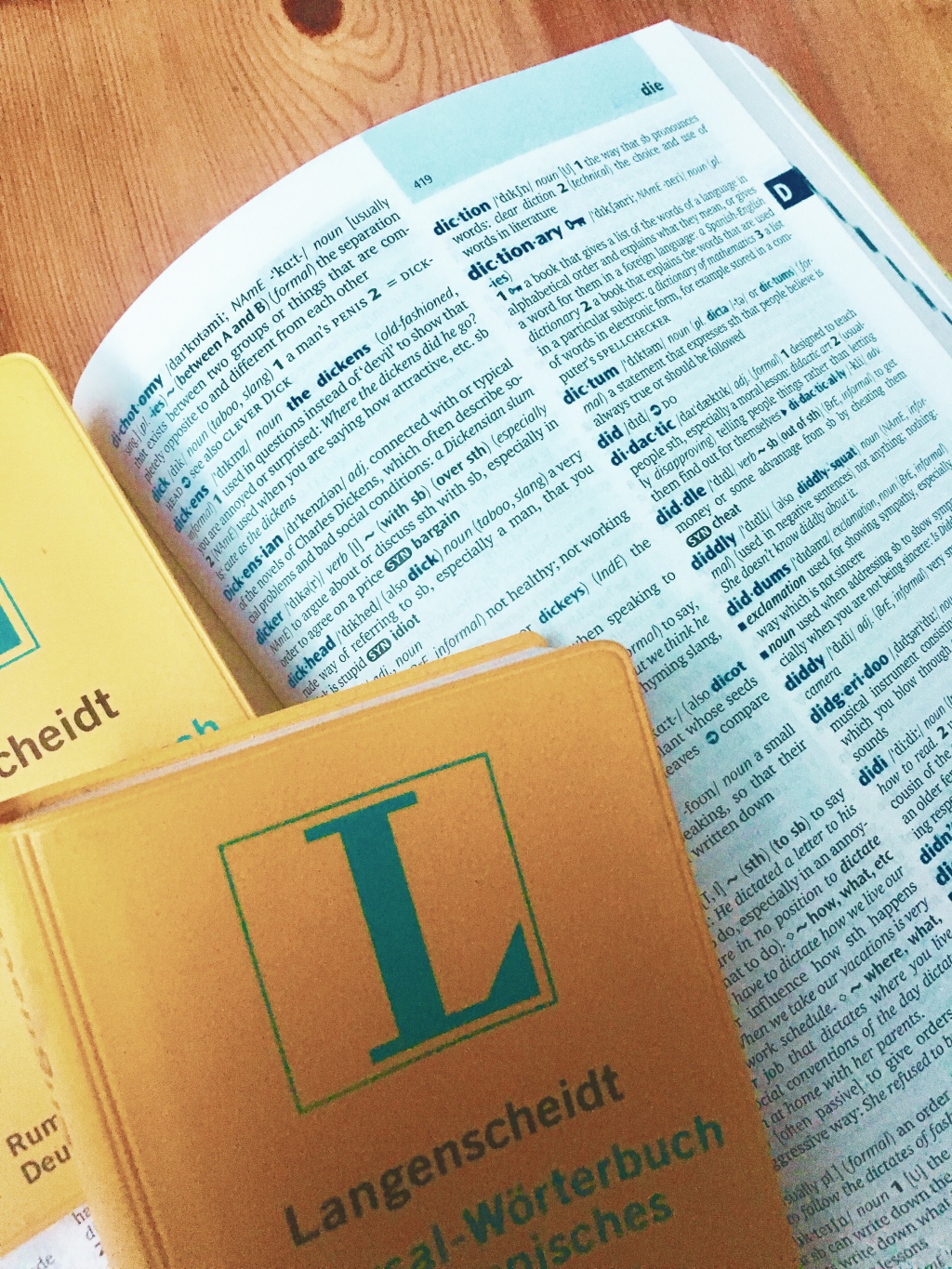 Today is Dictionary Day, but hold on a second before you go posin’ your copy of Merriam-Webster next to your coffee, mini-pumpkins, and beige sweater.

While some dictionaries out there try portray up-to-date, authentic language usage (i.e. Urban Dictionary), the majority of dictionaries and grammar books function as tools used to implement and naturalize prescriptivist standard language ideology. For the non-linguistics students out there, that means they prescribe how language should be used, usually with inevitable mistakes and the bias of the human author. As much as we’ve been taught to point to the dictionary as an authority on language, standard English is impossible to pin down.

Take this very abridged version of the standard English debate in the US (condensed and watered-down from Lesley Milroy’s essay on standard language ideology and a paper I wrote last year):

After the American Revolution, the founders were looking for a way to move forward, including how to unite a variety of regions and cultures that speak a multitude of languages.

On one side of the debate, you have people like John Adams who proposed a National Language Academy to promote American achievements and those who believe that to have a community, it must be cohesive (read: homogeneous). Benjamin Franklin once complained about the influx Pennsylvanian Germans: “They will soon so outnumber us, that all the advantages we have will not, in My Opinion, be able to preserve our language, and even our government will become precarious.”

On the other side, there’s a descriptivist approach, where one gives linguistic authority to the speakers themselves and sees value in multi-lingual communities. For example, Benjamin Rush (a guy that signed the Declaration of Independence) has this quote I love:

“A man who is learned in the dialect of a Mohawk Indian is more fit for a legislator than a man who is ignorant even in the language of the early Greeks.”
Benjamin Rush

Ultimately, Adams’ proposals were given a thumbs down. (Turns out that the country newly separated from a monarchy wasn’t too thrilled about the idea of enforcing an elitist national language) (in fact, this rejection of Monarchical excess is why Webster later proposed simplified punctuations and spellings such as color instead of colour). To this day, contrary to popular belief, the U.S. has no official language.

“So why bring this up if everything ended up being so chill,” you ask?

The standard language struggle between descriptivists and prescriptivists has continued in the centuries since. Each attempt to pin down a variety of English as an official standard has also wielded linguistic power over minority groups. In many cases, the “English-only” movement has been used to empower racist policies. Here’s some examples:

Disguised as “to have a community, it must be cohesive,” these policies have and continue to work against minority groups.

Dictionary Day celebrates the birthday of Noah Webster, who made it his lifelong project to instill a “pure” American English. He was concerned “that even the smallest regional differences in spelling and pronunciation could turn into political difference, resulting in dangerous factions.” Sound familiar?

To end a lighter note, here are some word-filled dictionary articles and related material we found interesting. Enjoy! And happy dictionary day!

My List for Dictionary Day on Goodreads
I collected an array of minority dictionaries/glossaries, language histories, and lighter word-related reads in this Goodreads list so you can easily add them to your shelf!

People Say These 15 Words Aren’t Words But They Actually Are
Investigators from Reader’s Digest examine the crossing-over of commonly-used “words” like prolly, conversate, and funner into “standard” dictionaries.

Using Undictionaried Words
In this New York Times opinion piece, Erin McKean (founder of wordnik.com) talks about “lexical ‘dark matter'”—words that haven’t yet made it into the dictionary. “Why limit your word arsenal just to the words that have already been captured and pinned down, when you can stake out a literary claim to a word that’s new and fresh?” she asks.

They is a Singular Pronoun
This article from Dictionary.com uncovers how they has been used as a single-person pronoun since the 1300’s. In your face, transphobic Grammar Nazis.

The Right Rhymes
A hip-hop dictionary which looks at words within and across lyrics, possible definitions, and include maps which show where the artists that use the words originate from in the US. I just found this and will probably be spending the rest of the month exploring.