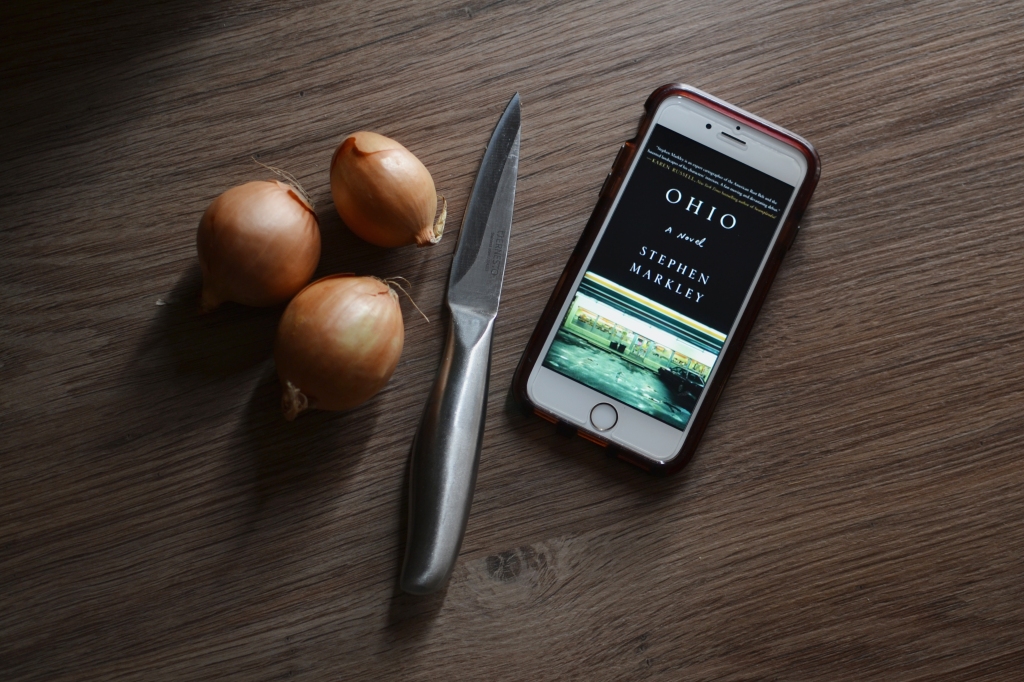 Check out my instagram for my verbal review of Ohio by Stephen Markley while I cut onions and cry.

When I saw Ohio hit the bookshelves, I quickly reserved a copy with my local library on principle alone (how many books take place in northeast Ohio? I’ll wait).

On the surface, Ohio describes four former classmates as they return to their small, Rust Belt hometown town one night in 2013. Beneath that, Ohio is a case study of a generation affected by war, economic collapse, the opioid epidemic, and political upheaval. As their evenings progress separately, their shared histories, regrets, and desires resurface and blur into an intertwined series of tragedies that can be traced back to their time in high school.

This debut fictional novel by Stephen Markley was published by Simon & Schuster last year (2018). Here are some reviews from NPR, the New York Times, and the Chicago Review of Books.

Spoilers! Skip to The Short Review below for a spoiler-free opinion.

I’ll admit it, as excited as I was to start reading, I was initially struck by the fear that the novel was going to be a political work a la Hillbilly Elegy, which—while I’m currently in the midst of reading mostly African-American and/or LGBT lit for class—I wasn’t in the right mindset to comb through. After reading ten or so percent, I considered returning it to the library to pick it up another time. I’m glad I didn’t.

There were a few aspects of Ohio that I loved. First of all, as a native Ohioan (from North Canton ✌️), I found myself enthralled by the descriptions of New Canaan. Although my hometown is much more of a bubble with upper/middle class folks—the smallness of New Canaan culture and the descriptions of the neighborhood haunts and landscape all felt familiar, like flipping through a copy of your neighboring towns’ newspaper.

Secondly, I was impressed by the characterization (especially once I got past the first section about Bill Ashcraft). My favorite section of the novel was the chapter focused on Stacey Moore. I’m usually skeptical of male authors writing about women—let alone queer women—from their perspectives, but Markley’s interpretation feels respectful of her fictional experience, combining themes of molting one’s teenage faith and identity with those of growth and maturity. With all of his characters, Markley digs deep to uncover what motivates them, what their limits are, and their willingness or refusal to surpass them.

Continuing from that thought—the characters who were not given full sections of airtime were still intricately silhouetted by the vignettes of the main characters’ memories. One such character is Brinklan, an Iraq War casualty whose funeral parade opens the novel. He’s only heard from in snippets of conversations and events within the memories of the main characters, but these complex pieces weave together in subversive, unexpected ways. Overall, Ohio is a brilliant exercise in multiperspectivity where Markley easily shifts between the present and past.

Also important: the epilogue has purpose. Let me type that again: the. epilogue. has. purpose. How many books have you loved to read until you got to a follow-up section tagged on to the end that felt like eating a too-sweet candy that sticks to your teeth? In Ohio, Markley keeps the pace, suspense, and thoughtfulness through the entire novel, from the prologue to the last words. It may feeling like it’s taking a while to get there, but the ending is worth the wait.

The Short Review: (on Goodreads!)

Taking place in a fictional northeast Ohio town, Stephen Markley’s debut novel describes a group of former high school classmates as they return to their hometown ten years later. As their night unfolds, the characters reflect on the repercussions of their teenage decisions as well as the environmental effects of the transforming political, economical, and social climate on their stories. At times moving, disturbing, suspenseful, stunning, and startling (not to mention demanding), Ohio starts as a critical exploration of a “somewhat forgotten” corner of society and ends as an vibrantly painted portrait of flawed individuals with a shocking conclusion.

Have you read Ohio? Let’s talk about it!